5 Naaman was the captain of the army of the king of Aram. He was very important to his king[a] because the Lord used him to lead Aram to victory. Naaman was a great and powerful man, but he was also sick with leprosy.

2 The Aramean army sent many groups of soldiers to fight in Israel. One time they took a little girl from the land of Israel. This girl became a servant of Naaman’s wife. 3 She said to his wife, “I wish that my master would meet the prophet who lives in Samaria. He could heal Naaman of his leprosy.”

7 When the king of Israel had read the letter, he tore his clothes to show he was sad and upset. He said, “Am I God? I don’t have the power over life and death. So why did the king of Aram send a man sick with leprosy for me to heal? Think about it, and you will see that it is a trick. The king of Aram is trying to start a fight.”

8 Elisha, the man of God, heard that the king of Israel had torn his clothes. So Elisha sent this message to the king: “Why did you tear your clothes? Let Naaman come to me. Then he will know there is a prophet in Israel.”

9 So Naaman came with his horses and chariots to Elisha’s house and stood outside the door. 10 Elisha sent a messenger to Naaman who said, “Go and wash in the Jordan River seven times. Then your skin will be healed, and you will be pure and clean.”

11 Naaman became angry and left. He said, “I thought Elisha would at least come out and stand in front of me and call on the name of the Lord his God. I thought he would wave his hand over my body and heal the leprosy. 12 Abana and Pharpar, the rivers of Damascus, are better than all the water in Israel. Why can’t I wash in those rivers in Damascus and become clean?” He was very angry and turned to leave.

13 But Naaman’s servants went to him and talked to him. They said, “Father,[a] if the prophet told you to do some great thing, you would do it, isn’t that right? But he said, ‘Wash, and you will be pure and clean.’”

14 So Naaman did what the man of God said. He went down and dipped himself in the Jordan River seven times, and he became pure and clean. His skin became soft like the skin of a baby.

15 Naaman and his whole group came back to the man of God. He stood before Elisha and said, “Look, I now know there is no God in all the earth except in Israel. Now please accept a gift from me.”

We acted out the story in Worship on Monday and thought about how hard it can be to follow advice sometimes. We also thought about whether all advice is good advice and who's advice we trusted the most. We thought our parents, teachers and friends would usually give us the best advice.

by teachers, parents and friends.

Help us to remember that good advice

and, as we get older, to help others.

Help us to know the difference between good and bad advice.

Song of the Week - Our God is a Great Big God 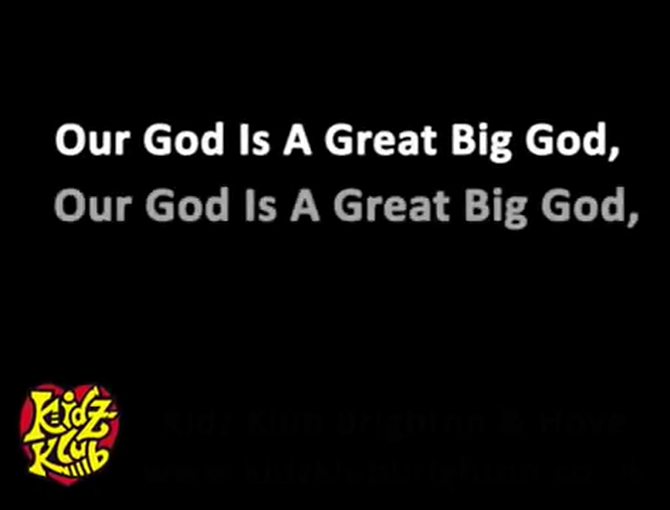